Secret Saturdays - Code of the Cryptids 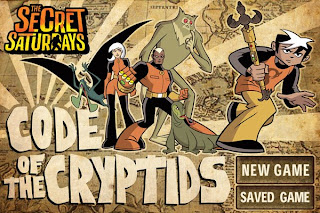 A bit of a different type of post today... Cartoon Network promotion! Yesterday was a big day for me because it saw the launch of two games from our in-house games studio. The first is a flash game on the website called "Secret Saturdays - Code of the Cryptids." It is an episodic game that will help promote the snazzy new show coming to the network in a few weeks. This was my first full blown project as an Art Director here, and it was a great learning process. On top of what the team did with the great character animation, I was able to paint the backgrounds, and do a lot of the in game artwork. Chapters two and three are on their way and so far they are shaping up to be even cooler than chapter one. The game plays great and I think it might be worth your time to give it a shot.

If you play the game, you might recognize this as the background scrolling behind you

And I did mention there were TWO games that launched on Monday... and the second is "Ben 10 Bounty Hunters." This is a big online multi-player game that is really a first step into the huge world of online gaming. I only became involved towards the end of the project, so I can't really take credit for how good it looks... but the team did a great job. Unfortunately it doesn't work on a Mac at this point (boooo...) but if you can steal a PC at some point it will most certainly be worth it. 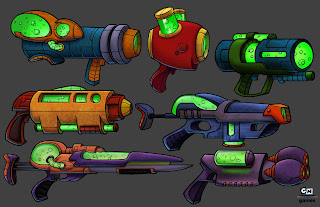 These are a few of the cool "capture devices" that you can use in the game. I was lucky enough to draw them up all shiny like.

So, that is my long winded post. Take a really long lunch break today and play some games!

ALL ARTWORK IN THIS POST PROPERTY OF CARTOON NETWORK.

Posted by Vanhoozerbot at 7:52 AM

Awesome, Jeremy! Both sound like fun projects. I love Jay Stephens and enjoyed the Secret Saturdays strip in the recent issue of the DC/CN mag. Bet the show'll be swell ... Too bad I don't use cable TV!

THE GAME IS AWESOME! THE ONLY THING THAT I DONT GET IT IS THAT HOW WE CAN GET FROM ONE PLACE TO ANOTHER BECAUSE I DONT GET HOW TO USE THE GADGET I HAVE FOUND, I FOUND AND HAVE THE RED AND GREEN THINGS IN EVERY LEVEL BUT I DONT HAVE THE YELLOW AND BLUE GADGETS COUSE I HAVE SEEN THEM BUT I DONT KNOW HOW TO GET TO THE OTHER SIDE...I CANT JUMP TO FAR AND I DON KNOW HOW TO USE THE GADGETS, ANY ONE CAN HELP?

You need to get the other skills to get to the blue and yellow ones.

Creative Blogs You Should Check Out

All images and content on this blog are ©Vanhoozer Studios unless otherwise specified, and should not be used without permission. The views and opinions featured on this blog are that of Jeremy Vanhoozer, and not in any way that of his employer, RowShamBow.